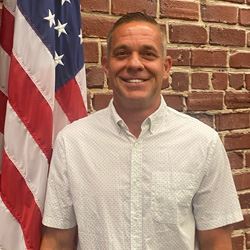 Mr. Joe Sagi currently serves as Ward 4 Commissioner for the City of Collinsville.  He was raised in Collinsville and is a 1995 CHS alumni and a proud citizen of the Cherokee Nation.

Joe obtained an Associate Degree in Applied Science from Oklahoma State University.  Go Pokes!   After college, he returned to Collinsville and started his family.  He owns and operates Collinsville Collision Center which he opened in 2006.  Joe also owns and runs a local property company.

Mr. Sagi has served as President and board member of Collinsville Downtown, Inc., and has won several awards during his tenure.  As Collinsville continues to grow, Joe enjoys participating in our community's economic development and planning initiatives.

Joe Backs the Blue and is a tremendous supporter of both the Collinsville Police and Fire Departments.  He is also a long-time member of the NRA.